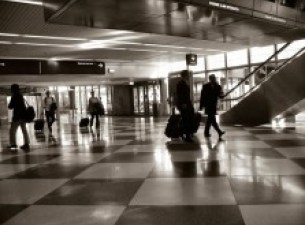 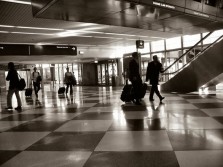 “Our next story is from Matt, who’s reporting from World Airport, where an unheard of phenomenon is occurring. Matt, what’s going on?”

The newscast cut over to Matt, who stood in the middle of a bustling airport terminal. Matt’s face instantly told the viewer that whatever he was about to report was quite unusual. “Well, Dan, I’ve been interviewing passengers at the airport, and no one seems to know where they’re traveling.”

Dan raised his eyebrows, incredulous. “What do you mean? Everyone knows where they’re traveling. Why else would they be traveling?”

Matt shook his head. “I know it’s hard to fathom, but that’s exactly the issue. Here, I’ll interview someone so you can hear it for yourself. Excuse me, Sir, do you have a minute for a few questions?”

The gentleman stopped and gave Matt his attention. “Sure, so long as it’s brief.”

Matt nodded. “It will be. I was just wondering if you could tell our viewers your final destination.”

“My final destination?” the man raised her eyebrows. “Well, I don’t typically think much about that. I’m just enjoying the present, you know. I’m not really sure where I’ll end up. Now if you’ll excuse me, I’ve got to run.”

“See what I mean?” Matt narrated, looking at the camera again.

“Surely some passengers have thought about their destination, at least?” Dan queried.

Matt nodded. “Oh, yes, some have. But they seem under a delusion about how to arrive there. Here, let me interview someone else. Excuse me, Ma’am,” Matt asked a lady walking by. “What’s your final destination?”

“Oh, I hope I’ll end up in Paradise,” the woman replied with a smile.

“Do you have a ticket?” Matt prodded.

“A ticket?” The woman thought for a moment. “No, but I try to be a good person. I’m a whole lot better than most folks. I’m sure they’ll let me on the plane.” The woman smiled.

On the other end of the newscast, Dan’s face dropped. Did he just hear that correctly?

“See what I mean?” Matt asked after the woman had walked away. “No one seems to grasp the fact that you need a ticket to get on a plane. People here complain a lot about the airport accommodations as if the journey itself was all there was to consider. It’s really strange, Dan. Here, let me try this gentleman. He looks a lot more serious than some of the others.”

The man paused. “I hope I’ll end up in Paradise,” he replied.

The man nodded. “No one can know for sure if the airline will take their ticket. But I’ve worked hard to make mine and keep it clean, so I’m hopeful.”

Matt looked at the homemade ticket the man held. “Did it occur to you that perhaps you have to get a ticket from the airline, and that any ticket not issued by them won’t get you on board?”

The man shook his head. “No, no, that’s so narrow-minded. Any well-done ticket will be accepted. You can bring yours from the airline, and I’ll bring mine. They’re all the same in the end. Now if you’ll excuse me…”

Matt sighed, turning back to the camera and explaining more details. “I went to the ticket counter a few minutes ago. They’re offering free tickets to any who want them. But most people seem either caught up in the moment and not worrying about their final destination, or else confident they’ll get on board without an official ticket. It’s a strange, terrible delusion, Dan. Even worse, this airport is going to be destroyed soon. These people have got to get on a plane out of here or–”

Dan nodded, trying hard to keep his composure. “Do what you can to warn people, Matt. Maybe some will get a real ticket while they still can.”

“In whom the god of this world hath blinded the minds of them which believe not, lest the light of the glorious gospel of Christ, who is the image of God, should shine unto them.” 2 Corinthians 4:4

“For the wages of sin is death; but the gift of God is eternal life through Jesus Christ our Lord.” Romans 6:23

2 thoughts on “Short Story: No Destination?”