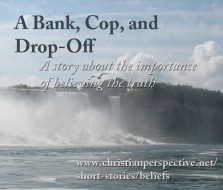 Jane was under a very strange misunderstanding. She’d been told that she could believe whatever she wanted about everything and was living her life as if believing something made it true. The only problem was, that simply wasn’t the case, as she was soon to find out.

Jane sauntered into the bank and confidently walked up to the teller. “I’d like to withdrawal one million dollars,” she announced confidently.

The teller looked up in surprise. “May I see your I.D. and have your bank account number?” she asked suspiciously.

Jane promptly handed over the requested items. After a minute, the teller announced, “I’m sorry, but your account balance is only $200. That’s the maximum you can withdrawal.”

Jane shook her head. “I believe my balance is 2 million dollars, and I’d like to withdrawal 1 million please.”

The teller tried again to explain reality to Jane, but she simply didn’t want to hear. Finally, Jane realized she was getting nowhere and stormed off to her car. Realizing she was late for her weekly kayaking trip, she sped down the road.

Soon, she heard a siren and found herself pulled over to the side of the road. The cop informed her she’d violated the speed limit and needed to pay a fine.

“But sir, I don’t believe in the speed limit,” she informed him.

The cop raised his eyebrows a little. Was this girl for real? “Well believe in it or not, you have to obey it,” he replied calmly, handing her the ticket.

Jane again realized there was nothing she could do but accept the ticket and be on her way. She was immensely relived to reach the riverbank at last and hop into her kayak. As she was heading down the river, she wondered what the river was like. She’d never been down this particular river before. She wondered if it had any rapids.

Jane felt a momentary panic at the thought of the possibility of rapids, but then a smile returned to her face. She didn’t believe the river had any rapids, so she’d be just fine.

As she happily rowed along, she past another kayak anchored up on the shore. The man in it frantically waved her down. “Hasn’t anyone told you? There’s a huge drop-off up ahead. You’d better pull off here. I’ve got a friend coming with a van who can drive you back.”

Jane did not welcome this intrusion on her happiness. “Look, I’m very happy. I don’t want to think about a drop-off. I don’t believe in it.”

The man tried his best to explain the pending danger, even pulling out a map of the river, but Jane refused to listen. “You can believe whatever you want, but let me believe what I want too. Let’s both just be happy.”

“It’s not about happiness! You’re believing a lie and about ready to-”

Jane cut him off. “I can believe whatever I want. Who’s to say you’re right and I’m wrong?”

The man tried again. “You’re right–you can believe whatever you want. But you’d better make sure your belief is anchored in truth. I believe in the drop-off because of this map–it clearly shows it and warns about it.”

“And I believe there is no drop-off,” Jane repeated.

“But on what basis?”

Jane squirmed. “I don’t want to talk about it anymore.” With that, Jane continued downriver, inching closer and closer to the drop-off which if she continued along her present path, would hurl her to her death, whether she believed in it or not. Oh, if only she would stop to make sure her beliefs were grounded in truth!

I have been reminded a lot lately of the importance of making sure our beliefs line up with the truth of God’s Word, the Bible. God does not lie. He means what He says.

“Thy word is true from the beginning: and every one of thy righteous judgments endureth for ever.” Psalm 119:160

“All scripture is given by inspiration of God, and is profitable for doctrine, for reproof, for correction, for instruction in righteousness:” 2 Timothy 3:16-17

The only question is, are we living like we believe the truth of God’s Word? Can we say with the Psalmist that God’s Word is lighting our path, or are there areas where we’re clinging to our own darkness?

1 thought on “Story: A Bank, Cop, and Drop-Off (or Believe Whatever You Want, But…)”