“Come on, little birdy, fly out—no, not that way!” Jedediah felt his pleadings with the poor bird were in vain. He had been trying for the last half hour to rescue a poor bird that had flown into the garage and now couldn’t figure out how to get out.

It’s not that the door wasn’t open—it was. The sunshine streamed 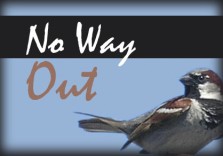 into the garage. There was a way out—only the bird wouldn’t take it. It seemed determined that if it just flailed its little body against the side or roof of the garage enough times, it would break free. But all its efforts ended only in ruffled feathers and further discouragement. It felt trapped in the darkness, unable to get back out into the beautiful summer day.

“No, don’t give up!” Jedediah gently encouraged the bird, which had landed in a corner, overcome by defeat. Oh, why couldn’t the bird see that there was a wide open door waiting for it to fly through!

Do you ever feel stuck in the garage, so to speak? Maybe there’s an attitude or action in your life you know is wrong, but you feel stuck and unable to change. Maybe you, like the bird, have tried hard to conquer your sin, but to no avail.

There’s good news. While we can no more conquer sin than a bird can escape from a garage by flying into the walls or ceiling, Jesus has already conquered sin. The garage door is wide open—we’ve only to fly to Jesus and take the way of escape He promises to provide.

“There hath no temptation taken you but such as is common to man: but God is faithful, who will not suffer you to be tempted above that ye are able; but will with the temptation also make a way to escape, that ye may be able to bear it.” 1 Corinthians 10:13

“For in that he himself hath suffered being tempted, he is able to succour them that are tempted.” Hebrews 2:18

“For we have not an high priest which cannot be touched with the feeling of our infirmities; but was in all points tempted like as we are, yet without sin. Let us therefore come boldly unto the throne of grace, that we may obtain mercy, and find grace to help in time of need.” Hebrews 4:15–16