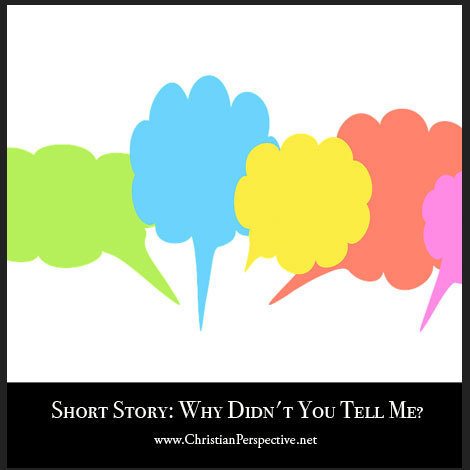 What incredibly good news we have to celebrate this Christmas–Jesus came, took the punishment we deserved, rose again, and now offers eternal life to those who will believe upon Him!

I hope the story below will encourage you to share that good news with others. As atheist Penn Jillete said, “How much do you have to hate somebody to believe that everlasting life is possible and not tell them that?”

Wishing you a blessed Christmas season!

Short Story: Why Didn’t You Tell Me?

Jeremy could hardly believe it.

His debt, which he never thought he’d ever be able be able to pay, was paid! This debt was not just any debt–it was a serious one that would have one day cost him his very life. To say he was excited was to put it mildly.

At first, Jeremy told everyone he could. After all, the King who paid his debt offered to do the same for others too. This was the best news ever!

Yet after a few people refused to believe Jeremy, Jeremy got discouraged and stopped telling others. Instead, he kept it to himself.

Jeremy smiled. “My debt’s been paid too. It’s been a couple of years, actually.”

Matt stared at Jeremy in shock. “Then why didn’t you tell me? How could you keep such news to yourself?”

Jeremy wasn’t sure how to respond. “It’s just–” he took a step closer to Matt, but Matt drew back, offended.

“How could you claim to be my friend when you didn’t tell me about this? You would have let me die without telling me of the King’s offer of salvation?”

Once again, Jeremy didn’t have an answer. He hung his head, realizing how foolish he’d been. “Forgive me,” he whispered. “Shall we go tell others?”

Together, they headed out to tell everyone they could the good news. Of course, some didn’t believe them. But others did. And either way, Jeremy discovered there was tremendous joy in telling others such good news. It continually filled his heart with joy again over the gift he’d been given. Oh, why hadn’t he shared before?

“For unto you is born this day in the city of David a Saviour, which is Christ the Lord.  And this shall be a sign unto you; Ye shall find the babe wrapped in swaddling clothes, lying in a manger. And suddenly there was with the angel a multitude of the heavenly host praising God, and saying, Glory to God in the highest, and on earth peace, good will toward men. And it came to pass, as the angels were gone away from them into heaven, the shepherds said one to another, Let us now go even unto Bethlehem, and see this thing which is come to pass, which the Lord hath made known unto us. And they came with haste, and found Mary, and Joseph, and the babe lying in a manger. And when they had seen it, they made known abroad the saying which was told them concerning this child.” Luke 2:11-17 (KJV)

If you’re struggling with how to begin sharing the good news of Jesus (I know I did for years), there are a lot of helpful evangelism resources and ideas at LivingWaters.com. Here’s a simple idea a friend shared with me that you could use this time of year: hand someone a candy cane and ask if you can share the story of the candy cane (you can easily find it online). You can use that to start talking about how Jesus came to be the Good Shepherd–to lay down His life–to take the punishment for our sin! Or ask what they think is the most important thing about Christmas…and what will be the most important thing the moment after they die.