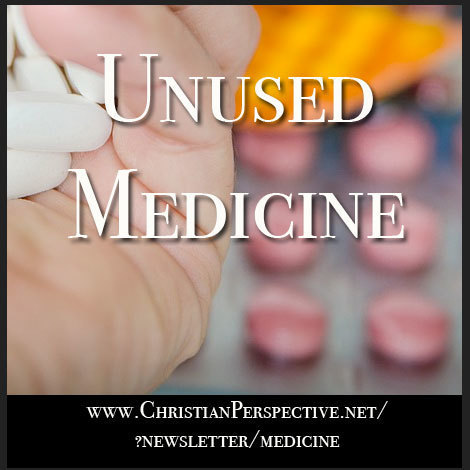 Maureen stared at the shelves of medicines in awe. Why, Sarah’s medicine cabinet rivaled any pharmacy’s…as did her knowledge of the different medications.

“What does this one do?” Maureen asked, holding up a bottle of pink pills.

“Oh, that’s an antibiotic for infections. It—” Sarah’s voice cut off in a cough that caused her to double over in pain.

“Are you okay?” Maureen asked, concerned.

After the coughing finally finished, Sarah replied in a shaky voice, “I’m fine. I just have a bad infection. But no worries.”

“What’s this cream for?” Maureen asked, pointing to a cream on the shelf.

Maureen glanced at her friend in confusion. She knew her friend had often complained about her skin infections. In fact, Sarah was constantly sick. “I don’t get it,” she confessed. “If you have all of these medicines, why are you always so sick?”

Sarah hardly looked up from the letter she was attempting to write. “I don’t know. I’ve had the medicines for years, but I guess I’m just doomed to sickness.”

Maureen turned from the medicine cabinet and sat next to her friend. What could be the problem? “Do you take the medicine like it’s prescribed?”

Sarah blushed. “Well, now that you mention it, no, I guess I don’t.”

“So let me get this straight. You have all of these medications, and know all about them, but you don’t take them?”

Maureen shook her head in disbelief. “I guess we both know now why they’re not working. Sarah, you have to act on what you know.”

“But be ye doers of the word, and not hearers only, deceiving your own selves. For if any be a hearer of the word, and not a doer, he is like unto a man beholding his natural face in a glass: For he beholdeth himself, and goeth his way, and straightway forgetteth what manner of man he was. But whoso looketh into the perfect law of liberty, and continueth therein, he being not a forgetful hearer, but a doer of the work, this man shall be blessed in his deed.” James 1:22-25 (KJV)