Does the number 6 mean something special in the Bible? What about the number 3 or 4? And is there a hidden code within scripture?

Numbers in scripture have intrigued many theologians and laymen alike. However, we need to be very careful when attempting to draw meaning from numbers in the Bible. You can read more about why we feel this way on our biblical meaning of numbers page.

The Bible Helps Us Understand Numbers

While I think we need to be very careful about trying to assign a meaning to numbers in the Bible, I believe scripture gives us principles that can help us understand the world around us–including numbers!

When you think about it, numbers (1, 2, 3, etc.) are really just symbols we use to represent quantities. And who created quantities? God did!

God is the one who created the quantities we use numerals to record. He’s also the one who gave man the ability to recognize and record quantities in the first place!

Have you ever wondered where math came from? Or why math works? When we approach numbers and the rest of math from a biblical perspective, these questions get answered. We also discover that math itself is an incredible testimony to God’s faithfulness and care.

Where Did Addition Come From?

Let me briefly illustrate. We have often taken an object, added another object to it, and were then left with two objects (like when we took one cookie and one piece of pie and ended up eating two desserts). It does not matter what we attempt to add, objects always add in the same way. An accountant adds dollars, a baker adds doughnuts, a retailer adds inventory, and an electrician adds wattage. Yet addition works the same way for all of these people. Why? Because all things add in a regular, precise manner. We refer to this regularity as the addition principle.

God created this principle that prevails throughout creation. When God created all things, He determined how they would operate. He chose to make everything–from dollars to watts–operate according to the same reliable principle we call addition.

Man has developed different ways to express on paper this consistency God placed around us. Throughout history, cultures have used different symbols to represent quantities. For instance, the Romans used Roman numerals (I, V X, etc.) instead of our current Arabic system (1, 5, 10, etc.). However, man has never created anything in math. He has merely developed different ways of representing the orderly way things add. Addition originated with God.

Why Does Addition Work?

Now that we know where addition originated, let us look at why addition works. We will find the answer in the very next verse of Colossians, which reads, “In him all things hold together” (Colossians 1:17 NIV). Since the word all includes addition, God not only created addition but also continually holds addition together.

Can you imagine what would happen if objects did not always combine in the same way? If the equation “1 + 1 = 2” only worked some of the time? Math as we know it would be impossible! It would be pointless to memorize addition facts and solve problems on paper if those facts and problems did not consistently work in the physical world. Ponder for a moment what a miracle it is that math always works. Whether we are on the moon or in our own backyard, one plus one always equals two. Math is consistent because God consistently holds every part of the universe in its place. God’s faithfulness in holding this universe together ensures us that objects will always add the same way and that the equation “1 + 1 = 2” will always work.

The Bible reveals a lot about addition. We have only looked at two verses and already we know:

• Where addition came from (God created it); and

• Why addition works (because God faithfully sustains the universe).

The principles we have discovered about the addition equation “1 + 1 = 2” apply to the rest of math. Like addition, all of math is a way of recording and expressing the laws and relationships God created. Math works because God faithfully holds everything in place. Math is not independent from God. It is not neutral. Math’s very existence and ability to work is dependent on God’s faithfulness in holding everything together!

If I have not established my covenant with day and night and the fixed laws of heaven and earth, then I will reject the descendants of Jacob and David my servant. (Jeremiah 33:25-26 NIV)

The fact that God holds everything together according to fixed laws demonstrates that He is a covenant-keeping God. His consistency in keeping one plus one equaling two serves as a continual testimony to us of His loyalty, faithfulness, and loving kindness.

Just think, every time you use math to count or add something, you witness the fact that God is still consistently sustaining the universe. It is as though math were shouting out to you, “God is still in charge! He is faithful. He will keep His covenant of redemption with you.”

Math is really a testimony to God’s faithfulness and power. Math should continually remind us of God’s consistency and trustworthiness. After all, one plus one always equals two because an awesome, never-changing God created and sustains all things.

Math Reveals the Design Around Us 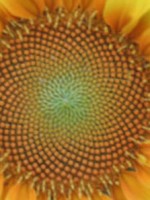 Just looking at a sunflower, we can tell that the sunflower was carefully designed by a wise Creator. Math, however, allows us to see God’s design to a new level, revealing the care God took with each aspect of His creation.

The seeds in all sunflowers—be they large or small—are arranged according to two patterns. When we use math to examine these patterns, we observe that, no matter how many seeds the sunflower contains, the patterns always relate to each other according to the exact same mathematical proportion. It turns out that that precise proportion enables the most amount of seeds to fit in any given sunflower. What a wise, caring Creator we serve!

Seeing the amazing way God designed the sunflower should remind us that we can trust Him to take care of the details of our lives.

Now if God so clothes the grass of the field, which today is, and tomorrow is thrown into the oven, will He not much more clothe you, O you of little faith? Matthew 6:30

Math Is NOT a Neutral Subject

As we understand biblically where math came from and why it works so consistently, we find that God is not only in math, but He created and sustains math. Instead of setting God aside when we approach math, let us set aside our old ideas about math and approach math expecting it to glorify the Lord.