This page is designed to help provide support for Kate’s Jacob’s Geometry eCourse, a video supplement that walk students through Jacob’s Geometry in an engaging, visual/auditory way! View samples on MasterBooksAcademy.com.

As I get questions about problems or discover errors, I will post clarifications or corrections here. If your question isn’t here and you’re taking the eCourse, please email me so I can get back with you on it (and add it here for others to learn from too).

Students may think the answer is planes, and all the polygons are indeed in different planes. However, in geometry, it’s really important to read very carefully and give precise answers, as we then build on those answers. The question was what kind of geometric figure. A plane is not a figure–if you look at page 9, you’ll see it make a point about how while it’s pictured as having edges, it really has no boundaries. So while the sides are in different planes, the figures they are are polygons. Make sure the understands that a plane doesn’t have boundaries.

Students may wonder why RO is being counted as an edge; the key here is in reading very carefully. The problem explains that the pattern can be used to form a cube. So in answering the question, it’s looking it at not as a flat figure (in which case RO wouldn’t be an edge) but as a cube (which you’d get if you folded it up).

Students who start by dividing both sides by x may think the problem is unsolvable, getting x + 7 = x. Dividing both sides by x works fine provided the unknown does not equal 0. Since we can’t divide by 0, it wouldn’t work to divide both sides by x if x = 0. Typically math books operate with the assumption that the unknown is not 0 and allow for dividing by an unknown. Here, though, was one of those rare exceptions where they made x equal to 0. If you ever come across an unsolvable result or a different answer than the Solutions Manual after dividing by an unknown, try solving another way (or plugging in 0 for the unknown) to see if perhaps the unknown is 0.

You may be tempted to write AC = BD as the answer to 38. Although that is a true statement, it’s not true because  A-B-C. When the book is asking because A-B-C, it’s asking you to think through what you can conclude based on that information alone. A-B-C is a way of writing that B is between A and C. On page 86, we learned If A-B-C, then AB + BC = AC. So that’s why we can conclude that AC = AB + BC because A-B-C. The same thing for problem 39–we need to write down what we can conclude because B-C-D. Make sure you’re taking notes on what you learn so you can see what you can conclude because of something else. Geometry isn’t just about listing a true statement as is the case in other math courses–it’s about showing logically how that statement was arrived at, thus teaching critical thinking and deductive reasoning.

On #40, the question is why can we say that AB + BC equals BC + CD. Look closely at what happened and the properties on page 79. In the addition property, we’re concluding that if a = b, then a+ c = b + c. In other words, we have 2 equal quantities, and adding an equal quantity to both sides will not change that equality. It’s just a fancy way of stating what you’ve been doing in algebra already. But in the case of AB + BC = BC + CD, we’re starting with the answers to 38 and 39: AC = AB + BC and BD = BC + CD. We were told at the beginning that AC = BD. So we’d use substitution to substitute AB + BC for AC and BC + CD for BD.

Note that throughout this course, there are a lot of questions that build on the previous one. The curriculum is trying to break down thinking through logic step by step. But if you struggle on one part, you may end up getting the others wrong too. That’s why I don’t have the exercises count in grading–it’s assumed students will get a lot of the exercises wrong as they get a handle on the material. The goal is to learn so by the tests you’ve got it.

Don’t look at the lines that are next to each other, as they are not perpendicular. The picture here shows the 5 sets of perpendicular lines. (The green , pink ones, red ones, penciled ones, and blue ones are all perpendicular.) 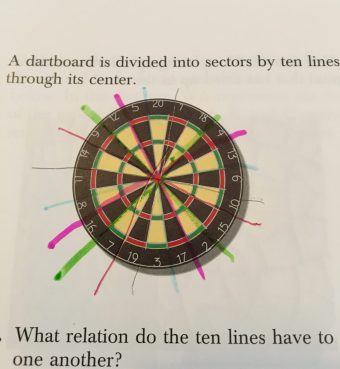 Chapter 3, Summary and Review, Problem 19
Notice in the figure where I’ve marked all the information given (which is the first step to solving the problem). OB’s coordinate would be found by taking AOD minus BOD, not minus AOC. That gives 110-80, which equals 30. 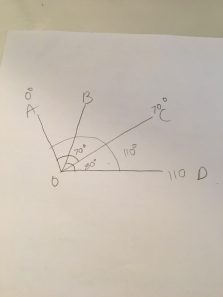 Note that this is a tough problem, so I’m giving a hint here.

This problem is based on several that come before it. In order to reach these conclusions, as you go through the preceding problems, mark the figure with whatever information you learn at each step. So when you learn certain triangles are congruent, mark their corresponding angles and sides as congruent. Using different colors will help in long problems like this where the tick marks could get to be way too many otherwise. (Rather than using 2 tick marks for the second pair of angles you mark, just use a different color pencil.)

Now look at your notes (which are super important to be taking!) and go through everything you know about triangles, seeing what you can tell about these triangles. You can see in the markings that there are two angles in DEB that are green (so the same) and two in AEC that are red (and thus the same). Looking at your notes, what can you then conclude?

The image shows how AB was found using the Pythagorean theorem. The other measurements were obtained the same way. 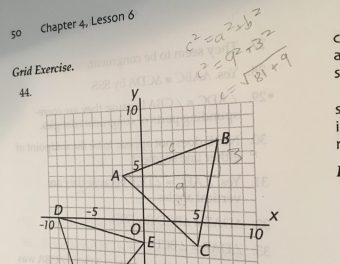 Students who list linear pair as the answer are correct; however, that answer doesn’t help us prove what we’re trying to prove in the next few problems. The questions are building to try to a conclusion in problem 12 that can only be established if we know that they are supplementary–that they add to 180 degrees–because one way we know that lines are parallel is that supplementary interior angles on the same side of a transversal (problem 13).

The Solutions Manual is using whichever definition is used in the next point it’s making–supplementary is used as part of the way to know lines are parallel in this case, so it’s being used.

The problem should really include that the altitudes for triangles BDE and CFD as well and say that they are equal to BH and EG. If we knew that, then the Solution Manual’s steps would explain the answer.

In problem 41, we set up a ratio between the sides of AO and the sides of A1, getting 1188/x = x/594 and solving the proportion in 42 to see that x was 840 mm. We could set up that proportion because we told that the sizes were similar.

Chapter 10, Lesson 4, Number 50
Alternate Proof for Students Who Already Know About SSS Theorem from Other Material (Thank you, Isaac!)

On problem 21, The left hand side of the Solutions Manual shows 1) multiplying both sides by Rr1r2 and distributing the multiplication. When you multiply the left side by that, you end up with r1r2; the right side Rr2 + Rr1. 2) Here they’ve swapped sides of the equation to put R on the left AND factored out an R at the same time. They skipped showing the step of writing Rr2 + Rr1 = r1r2. 3) Divide both sides by r1 + r2.

Problem 22 follows similar steps to those above.
Problem 23, they multiplied both sides by vur and distributed the multiplication, continuing from there.

The general idea is that we multiply both sides by a common denominator, which we find by multiplying each of the denominators together (so RR1r2 in problems 21-22). Then we distributed the multiplication and simplify.

This skill was covered on pages 614-617 in Elementary Algebra. Do not stress over this if you used a different course that did not cover this. It is covered in Algebra 2 in more depth. Feel free to skip these problems if you don’t have Elementary Algebra to look back at and the above explanation is not sufficient.

Chapter 12, Lesson 4, Problem 189
This is an explanation of how this case could be proved in a similar way for those curious.

Chapter 12, Lesson 6, Problem 29 (Number 39 Is Similar)
This is an explanation of how the answer is obtained. Note that problem 39 follows similar reasoning.

Look at the graph drawn in the Solution manual for problem 28. The distance formula is to find the distance between two points–if you look it up in the Index, you’ll find it is explained on page 134. Here, we know that the distance between the center point (which is 0,0) and any point on the circle is 5, as we’re told the radius is 5. Thus, d in the formula is 5, and we can plug in 0,0 as x1 and y1 (or as x2 and y2–it really wouldn’t matter) and x and y as the others since those are the symbols we’re using in this case. That leaves us with √[(x – 0)2 + (y – 0)2] = 5 OR √[(0 – x)2 + (0 – y)2] = 5. In either case, if we square both sides, we get that x2 + y2 = 25.
Chapter 13, Lesson 3, Number 14
You could also use SAS to prove the triangles congruent. Note on page 244 that SAS is part of the proof of HL.
Chapter 13, Lesson 4, Number 51
The answer mentions that the altitude is the third altitude. The idea of it being the third altitude is not important to have in the answer. The other two altitudes were already identified in 49, and each triangle has 3 altitudes, so that’s why it said the third. It would have been the first if it was the first one drawn. The important part of the answer is that AF is the altitude and an understanding as to how we know that.
Chapter 15, Lesson 7, Number 45
In the Solution Manual, there should be an A instead of a V = and the answer should be mi^2 not mi^3.

If you’re struggling through the first several chapters, take heart! It should get easier. Geometry requires training the brain in a lot of logic. Keep in mind that the problems are designed to be exercises and to stretch you! It is okay if you get some wrong–use the tests as your assessment. Here are few things to make sure you’re doing: