Note: I’m excited to introduce this series of guest posts from a good friend, physicist, engineer, and data scientist, Dr. Adam F. Hannon. The series explores waves (and I don’t just mean ocean waves!). More technical details are given in the endnotes for those who would like to dig deeper. I hope you’ll be as awed as I’ve been as I’ve edited the posts at God’s handiwork in the waves all around us…which math helps us explore.
– Katherine

No doubt you learned about sines and cosines in school, along with the number pi (π). The amazing thing is these tools help us describe waves, from ocean waves to light waves to particle waves inside atoms.

Here’s the basic mathematical equation that describes almost all waves, known as the Wave Equation:

Without going into too much detail about the equation (more detail is included in an endnote[ii]), it essentially describes the relationship between how a wave varies over time to how it varies in space. The letters and symbols stand for different quantities. For example, the t stands for time, the Greek letter ψ (psi pronounced “sigh”) is the quantity that is “waving” or oscillating (e.g. for an ocean wave it is the distance from where the water surface is to where it would be without the wave), and the v for velocity (think speed in a specific direction). A schematic of how ψ and v look for a water ocean wave is shown in Figure 1.

Figure 1. A picture of a water wave with the math symbols we use to describe it.

Ocean waves are one example of a wave occurring in matter. Matter refers to the materials that make up the world around us. In the case of ocean waves, the matter is the water, and that water is what is making up the wave.

Another example of waves occurring in matter is a vibrating string such as in a piano, guitar, or other musical instrument (here the matter waving is the metallic string). The string goes up and down, much like an ocean wave. These string vibrations can be thought of as waves…and they too can be described mathematically with the same wave equation as the ocean waves.

Now, the vibrating string causes the air molecules near the string to move in a similar way, which creates another wave in the air around us. While we cannot see the matter “waving” here, sound waves are really the same idea as the waves we see in oceans and strings. Air is full of gas particles that are a form of matter and that can move as a pressure wave so we hear sound. The sounds travel as waves through the gas particles in the air until it reaches our ears.

All these waves occurring in matter can be described by the Wave Equation above. What differs between the different waves is the kind of matter that is waving, how the waves are constrained (whether they can move freely as with ocean waves and air sound waves or if they are constrained, as is the case with a vibrating string), and the speed of the waves. If we wanted to explore these different waves mathematically, we would need to use algebra and calculus to solve the Wave Equation for ψ as a function of spatial position x and time t. The final solution we would get would depend on the material variables and boundary constraints of the wave. The solutions are generally made up of combinations of sine and cosine functions. In a future blog, we will look at such solutions for a vibrating string in a bit more detail so we can explore more of the order God placed within sounds.

A light wave is another kind of wave.

Light waves (a.k.a. electromagnetic waves or photons) are interesting in that they are actually two waves in one. One of the waves is an electric field (the same kind of electric field that gives you electricity in your house to run the computer or other electronic device you’re reading this on) and the other is a magnetic field (the same kind of magnetic field that holds cute baby pictures of your friends and relatives on your refrigerator). The two fields each have their own wave equation and are coupled together such that a light wave has two oscillatory (i.e., wave-like) components traveling at the same time. A schematic of this is shown in Figure 2.

Figure 2: A schematic diagram of a light wave. The electric field is shown with blue arrows and the magnetic field with red arrows. The light wave is traveling in time and space in the direction of the black arrow (which is perpendicular to all the red and blue arrows) at a certain speed, which we’ve represented with a c, known as the speed of light.

Each of these light waves can also be described by the Wave Equation.

Only it’s common to go ahead and rewrite the equation using different letters in order to specify that in the case of light waves, it’s E (the electric field; color coded blue) and B (the magnetic field; color coded red) that are “waving” or oscillating, and that the velocity is the speed of light (represented by a c; color coded purple):

Wave Equation Rewritten for the Electric Field in Light Waves[iv]

Wave Equation Rewritten for the Magnetic Field in Light Waves[v]

Interesting Note: You’ll notice that throughout physics many equations are basically the same except for the use of different letters. Using an E and a B here make it clearer what exactly is “waving” or oscillating in this case (the electric field and the magnetic field). And we use c instead of a v as that instantly tells us that in this particular case, our velocity (in this case, the speed of light) is constant because the convention is that c represents a constant value. (Because of the consistent way God governs the universe, the speed of light in vacuum is always constant—670,616,629 miles per hour—or 299,792.5 kilometers per hour for our international friends.) Another thing worth noting is the use of B for the magnetic field. You might be wondering why in the world a B is used to describe this? Well, it’s partly because M was used to describe a material property called the magnetization, so scientists had to choose a different letter.

Waves and the Subatomic

Interestingly, wave-like equations can also describe where the very particles that make up the atoms in our bodies (and the rest of the universe) are located!

It turns out that electrons orbit the nucleus of an atom in cloud shaped orbits. Well, the Schrödinger wave equation[vi] (yes, this equation is really describing an electron’s orbit as a wave!) shown below describes the likelihood of finding a given particle (i.e., an electron) at a given location in space and time:

Electrons in an atom occupy spherical orbitals that are known as spherical harmonics. These are in fact electron probability waves that are confined to a spherical region (in this case centered around the nucleus of an atom). The first set of these spherical harmonics can be seen in Figure 3 overlapping for a carbon atom.[vii] The different colors represent the different wave orbitals. Although they may not look like a wave, mathematically they can still be thought of as waves. 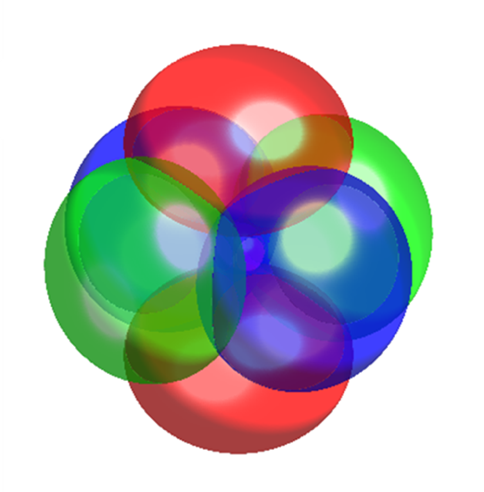 Figure 3: Schematic of the first 4 spherical harmonic orbitals of a carbon atom. The inner magenta spherical orbital is hard to see, but the 3 outer dumbbell shaped orbitals (red, green, and blue) can be seen quite easily.

If the electrons in our atoms did not fall into these Wave Equation-based orbitals, everything we know would instantly collapse in on each other. However, God knew what he was doing when he set the math to govern even the smallest of particles so that we could actually sit here and talk about the amazing structure of atoms.

Waves and the Creator

There are many other wave types we could look at (such as the gravitational waves that ripple through the very space-time fabric of our universe), each of which could be described with similar but slightly different equations. (The slight differences are due to the different physics involved.)

The fact that the math of music is so similar to the math of the subatomic is simply stunning. Even more stunning is the incredible order and design we see everywhere—from the oceans’ waves to the way God arranged the electrons in our atoms to make life possible. As we explore God’s creation with math (including algebra and calculus), we see His wisdom, care, and faithfulness.

In Psalm 104, after reflecting on many aspects of God’s creation, the Psalmists cries, “O Lord, how manifold are your works! In wisdom have you made them all; the earth is full of your creatures” (Psalm 104:24 esv). May we join the Psalmist in praising our Creator and resting in His incredible care.

Note: Stay tuned for the next blog on waves, in which we’ll explore light waves in more detail…

[vi] The keen observer will note this is not exactly the same as the standard wave equation mentioned earlier, but there are many similarities, so let us note the differences. Aside from all the physics constants (h is Planck’s constant, i is the imaginary number, V is an applied potential that can vary in space and time, and μ is the reduced mass of the particle being described), we see the main differences are that the time derivative is first order instead of second and that there is an applied potential term. The main effect of the time part being first order is that that the time part of the solution is a simple exponential, but since there is also an imaginary number, they normally are still oscillatory solutions.

The cool thing with the Schrödinger equation is that depending on what you put in for the V term, you get different kinds of waves. For a simple bound potential (called the particle in a box), you actually get the same free standing waves you would get for a guitar string! You can put a more complicated function in and get something called a harmonic oscillator. If you put in the actual electric potential caused by the protons in the nucleus of an atom, you get the spherical harmonics as discussed.

[vii] The interesting fact is the spherical harmonic orbitals actually do not overlap in the sense that an electron in one orbital has no likelihood of being in the wave state of another spherical harmonic at a given time (aside from electrons having different spin, but that is just an extra thing to account for that does not affect things too much).