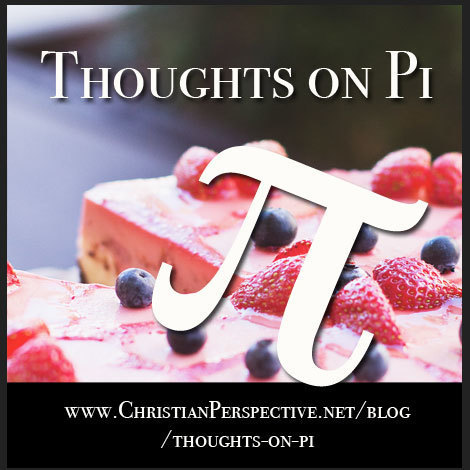 Someone recently wrote and asked me if I had any information on pi from a Christian perspective I could share. So here are some thoughts on this mind-boggling–and incredibly useful–number.

Pi, symbolized π, is “A transcendental number, approximately 3.14159, representing the ratio of the circumference to the diameter of a circle and appearing as a constant in a wide range of mathematical problems.”[1]

As this definition explains, pi is a transcendental–a number that keeps going on and on. To get a better feel, take a quick look at the first 100,000 digits of pi–it’s a mind-boggling number!

Numbers such as pi defy our comprehension. As I mention in Revealing Arithmetic when looking at different types of numbers,

When we look at pi, our minds should turn in awe and wonder at God’s greatness! Sadly, though, there “is almost a cultlike following that has arisen over the concept of π.”[3] It’s a reminder of Romans 1:20-23:

“For the invisible things of him from the creation of the world are clearly seen, being understood by the things that are made, even his eternal power and Godhead; so that they are without excuse: Because that, when they knew God, they glorified him not as God, neither were thankful; but became vain in their imaginations, and their foolish heart was darkened. Professing themselves to be wise, they became fools, And changed the glory of the uncorruptible God into an image made like to corruptible man, and to birds, and fourfooted beasts, and creeping things.”

Has Pi Always Been Expressed the Way It Is Today?

Hardly! The symbol π is just a symbol man chose to help express that real-life ratio–the symbol has actually been used to mean other things! Like most math symbols, it has been adopted within the last several hundred years [4].

Throughout history, men have tried to more precisely define pi. I found it fascinating to read in π: A Biography of the World’s Most Mysterious Number that, when you really dig into the text, it appears the Bible accurately uses pi to the fourth decimal place (1 Kings 7:23)—the book concluded that ”such accuracy is quite astonishing for ancient times.” [5] Not surprising considering the Bible’s Author!

Where Do We Use Pi?

Pi has a way of showing up all over the place–a testimony to the same Creator holding all things together. The most obvious use is when dealing with circles (for example, pi is used to find the area and circumference of a circle), but pi also proves useful in less-obvious places, such as in sound waves, general relativity, movements of the heavens, and probability, to name a few. 2018 Update: NASA has put together a Pi Day Challenge that shows just how useful pi is! Note that NASA does not come from a biblical worldview, so please use discernment (while most problems looked great, one at least hinted at finding life on other planets).

Why Are We Able to Explore Pi?

Because God created man in His image and gave him the ability to explore His creation! We’re thus accountable to Him for how we use that ability.

Where Can I Learn More?

There are lots of materials online that share more about pi (you might start with Wikipedia’s overview or this historical overview of pi). Your library may also have some books that could prove helpful. One I particularly enjoyed is π: A Biography of the World’s Most Mysterious Number by Alfred S. Posamentier and Ingmar Lehmanne.

The thing to keep in mind is to turn the wonder at pi itself into wonder at the Creator of all things–the one who understands what only baffles our comprehension.

Be careful when exploring pi to stand in awe of the Creator and not the creation itself. Throughout the years, men have been in awe of the number pi…yet that awe has often turned into an “almost cultlike following”[6] to the number instead of into awe of the Creator. To help put things in perspective, here’s a brief excerpt from Principles of Mathematics that explores pi, how it points us to the Creator, and how it’s been sadly twisted. http://www.christianperspective.net/wp-content/uploads/pi.pdf