With the Major League Baseball World Series well under way, I thought it would be a good time to take a look at the math involved in baseball. We’ll also see how all of it reminds us to praise the Creator.

Some of math’s applications to baseball are both obvious and basic. How many pitches a pitcher has pitched (called the “pitch count”), the strike and ball counts, the scores (called number of “runs”), the number of innings, the number of players, the numbers on the players’ jerseys—all these and more are examples of basic counting and numbers in action. How many innings are left after the 3rd finishes (assuming the game is not tied at the end)? That can be found using subtraction; taking 9 (the total innings with no tie game) – 3 (the innings completed) leaves the answer of 6 left. Do that same math after the top of the 3rd instead (meaning only half an inning has completed), and you get 9 – 2 ½ = 6 ½. Notice the fractional amount.

Baseball also has lots of examples of basic geometry in action. The shapes of the bases (squares), home plate (an irregular pentagon), ball (sphere), and infield (square or diamond) are all basic shapes familiar to many students. The perimeter of the infield would let us know how far a runner runs when he hits a home run; the volume of the ball could be useful if we needed to find the density of the ball (which would require basic algebra—the formula is listed below, where m is the mass and V the volume.

When watching a baseball game, lots of statistics appear on screen. These statistics are calculated using math!

Here’s a site that explains the math behind various other statistics used: https://www.mlb.com/glossary/standard-stats/earned-run-average. If you’re teaching elementary math, you might want to check it out and make up some problems for your child to use. For example, knowing that batting averages are found using the formula total hits ÷ total at bats, make up some numbers for total hits and total at bats. (Note that the total hits will typically be less than at bats…unless a player hits the ball every time!) Say a player hit the ball 5 times and had 25 at bats; a student can calculate then that his batting average is 5 divided by 25, or 0.2, by plugging 5 in for total hits and 25 for total at bats.

You might want to point out that whenever statistics are used, it’s important to ask questions about them, as they can easily be presented in a misleading way. While this isn’t really an issue in baseball (unless someone misunderstands the stat), baseball can be used to illustrate how statistics can be twisted to help students learn to discern through the bombardment of statistics we encounter in the news, advertisements, etc., where they ae often twisted.

For example, say it’s a player’s first time at bat ever in the major leagues. He hits the ball during that at bat. His batting average the next time he steps up to the plate is 1  (he’s had 1 hit and 1 at bat), which equals 1. If you just see a batting average of 1 you might think he’s an amazing player…but we don’t really know that yet. This illustrates a general rule in statistics that the more data you have to calculate an average off, a better reflection of reality is the average is. We need a lot more at bats than 1 to really know how good a player is based on their batting average. In a similar vein, batting averages can be calculated over a player’s lifetime, for a series, or for a game. The point is that it’s always important to understand how a stat is calculated and what it’s really saying.

Since we typically use letters to stand for unknowns in algebra, let’s replace total hits with an x. We’ll also replace the  with a fraction line, as that’s the typical way to show division in algebra. 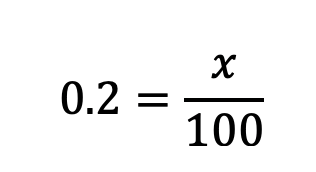 Now, because of the faithful, consistent way God governs creation, we can multiply both sides by 100 to solve for , thereby seeing that this player must have had a total of 20 hits.

Algebra (and calculus too) can also help us explore the physics behind baseball. For example, the speed of a pitch is cited throughout a game. While that speed is measured using a radar gun (a device built by using math to both understand and then design around the consistent way God governs creation), you could explain to your student how we could use algebra to calculate the approximate time the ball was in the air given that speed.

Plugging in the values and simplifying:

Converting that to seconds using the knowledge that there are 60 seconds in a minute and 60 minutes in an hour, we’d get approximately 0.45832 seconds for the time the ball was in the air, so not quite half a second. That’s not long!

While I won’t go into it in this post, there’s much more that we could use algebra and calculus to explore in baseball, including exploring the force the batter has to apply to the bat in different situations. Check out Chegg’s “Baseball and Calculus” if you’d like to explore calculus (plus really a lot of algebra too) and baseball further.

Think about the fact that in less than half a second (see the Algebra and Calculus section above), a batter is able to process a pitch and decide if and how to swing.

When I was going through a concussion recovery, I remember reading an article in the Answers magazine about how our brain is designed to learn. God has wired us so that if we practice a skill over and over again, our brain will actually change in response, allowing batters to train their brains to respond to pitches. Pause for just one minute to ponder that—and praise the God that made your incredible brain.

“I praise you, for I am fearfully and wonderfully made. Wonderful are your works; my soul knows it very well.” Psalm 139:14 (ESV)

Also think about all the math that is used in simply setting up a baseball field where the bases are the right distance from each other…and in analyzing a game (let alone a season). We tend to treat statistics as commonplace, but they’re really shouting out at us that we live in a consistent universe held together by a consistent God. After all, they’re found by using division and other math operations…which hold true because day after day, century after century, millennium after millennium, God holds creation together consistently.

Indeed, we need to take a moment to pause to praise—and to reflect on the fact that knowing our amazing Creator is the greatest goal we could ever run after. We achieve salvation from sin and a relationship with God by receiving “the righteousness from God that depends on faith” (Philippians 3:9 ESV), but the Christian life doesn’t end there. Like athletes chase after goals, we’re called to chase after living more and more like we will be one day in Heaven—Christ’s completely.

“But one thing I do: forgetting what lies behind and straining forward to what lies ahead, I press on toward the goal for the prize of the upward call of God in Christ Jesus.” Philippians 3:13b-14 (ESV)

Baseball is one of countless examples of math in action students explore in the Principles series. If you’re looking for a curriculum that both shows math’s usefulness and points math to the Creator, be sure to check out the biblical math materials we’ve put together.