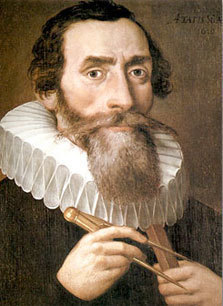 Known as the discoverer of the laws of planetary motion, Johannes Kepler was the first to propose that the planets circle the sun in elliptical shapes rather than in circular shapes as previously thought. Although often thought of as a scientist, Kepler was also a mathematician. In his study of planetary motion, Kepler used extensive math, including definitions, geometry, trigonometry, algebra, and other math concepts.

This mathematician’s life both provides an example of math in action and is resplendent with lessons! Join me in taking a brief look.

God’s Plans Are Not Always Ours
Johannes Kepler’s life illustrates the important truth that God’s plans are much better than are own–and sometimes they surprise us! Johannes Kepler did not plan on becoming a mathematician–he set out to become a minister. But toward the end of his university studies, his professors recommended him for a math position.

The young minister-to-be didn’t like the idea of giving up his divinity studies. Although he eventually agreed to take the position, Kepler still planned on becoming a minister one day. But God had something very different in mind for Kepler, as Kepler himself later recognized. [1]

In 1600, Kepler’s teaching career at the school came to an abrupt halt. Along with others who refused to convert to Catholicism, Kepler was told to leave the country! Yet although Kepler probably could not see it at the time, God had a plan to transform persecution and exile into a tremendous blessing.

Exiled from his own country, Kepler soon found himself assisting (and depending on the generosity of) the famous astronomer Tycho Brahe (pictured to the left)–that is, until Brahe died in 1601. After Brahe’s death, Kepler inherited Brahe’s position and records. Because he had been exiled from his own land and forced to take shelter under Tycho Brahe, Kepler now had the records he needed to discover the laws by which God caused the planets to orbit the sun. Who would have thought God would use a persecution and forced exile to help Kepler accomplish his life work?

Perseverance in the Face of Obstacles
One of the biggest lessons we can learn from Kepler is that of perseverance. Discovering the planetary laws did not prove an easy task. From a collection of numbers Brahe had made over a period of many years chronicling where in the sky Mars had appeared, Kepler tried to find some sort of orderly law that could express the way God caused Mars to orbit the sun.

Just how hard was this task? According to Robert Wilson, “It took Kepler eight years and nearly a thousand pages of closely written calculations before he cracked the problem and discovered his first two laws of planetary motion (the third was to wait another nine years).”[3] Can you imagine spending eight years on a geometry problem you are not even sure can be solved, then another nine years to finish the task?

Confidence God Created an Orderly Universe and Math Could Describe It
Kepler’s willingness to persevere came from his deep faith that God had created an orderly universe. Kepler longed to uncover that order so he might bring glory to His Creator and know Him better.

Kepler was unwilling to accept the “close” results obtained from the prevailing Greek cosmology of the universe, in which planets circled the sun in circles. Instead, he searched for a better model.

Questioning the Greeks was a huge step. For centuries, the Greek philosophers’ teachings had been taught as fact. To question them was equivalent to questioning proven fact. Kepler could only be so daring because he believed in God as the source of truth, not the Greeks’ human reasoning. [4]

Kepler’s Beliefs – The Good and Bad
No one reading through Kepler’s Harmonies of the World can doubt Kepler’s belief in God. He often paused in the middle of an explanation to mention his Creator, and sometimes even broke off into a hymn of praise. It seems almost as if Kepler still viewed himself as a minister, trying to uncover the glory of God throughout creation. His book on planetary motion ends with this tribute to God:

Crying out with the royal Psalmist: Great is our Lord and great His virtue and of His wisdom there is no number: praise Him, ye heavens, praise Him, ye sun, moon, and planets, use every sense for perceiving, every tongue for declaring your Creator…To Him be praise, honour, and glory, wourld without end. Amen. [5]

We can learn a lot from Kepler’s use of math as a tool to uncover God’s handiwork.

At the same time, though, Kepler’s theology and outlook on math were far from perfect. He carried over a lot of Greek mysticism into his beliefs about God and the universe. Forgetting that creation and our minds are both fallen, Kepler often drew unbiblical spiritual parallels and inferences about God. Kepler also dabbled in astrology (although he admitted it held no weight) and brought a good deal of mystical thinking into his astronomy.

Lesson? We need to be on guard against falsehoods and lies from our culture that try to creep into our hearts.

Conclusion
Within Kepler’s life, we see God’s sovereignty at work, using even an exile to accomplish His purposes. We also find a challenge to persevere–and to view the universe as God’s handiwork and worship Him while using math to explore it. At the same time, we find a warning to be careful about falsehoods that threaten to rob us of living in the completeness of God’s truth.

[1] Max Casper, one of Kepler’s biographers, says, “Looking back later when, through the discovery of his planet laws, he had become aware of his ability, he recognized the voice of God in the call which had come to him. It is God who by a combination of circumstances secretly guides man to the various arts and sciences and endows him with the sure consciousness that he is not only a part of the creation but also partakes in the divine providence.” Max Caspar, Kepler, trans./ed. by C. Doris Hellman (New York: Dover Publications, 1993), p. 51.

[2] Kepler believed God was geometry’s creator. “For the Creator, who is the very source of geometry and, as Plato wrote, ‘practices eternal geometry,’ does not stray from his own archetype.” Kepler, Johannes, Harmonies of the World, in On the Shoulders of Giants: The Great Works of Physics and Astronomy ed. Stephen Hawking (Philadelphia: Running Press Book Publishers, 2002), p. 645. The Bible, however, never tells us God “practices eternal geometry.” We should not be surprised to find that parts of God’s creation are even more complex than geometry can describe. Nonetheless, Kepler was right in his general belief that God created an orderly universe, and that math records that order.

[4] See Chapter 6 of Beyond Numbers for a basic overview of the switch from Greek thinking to biblical thinking that paved the way for the Scientific Reformation.

[5] Kepler, Johannes, Harmonies of the World, in On the Shoulders of Giants: The Great Works of Physics and Astronomy ed. Stephen Hawking (Philadelphia: Running Press Book Publishers, 2002), p. 723.

Kepler, Johannes, Harmonies of the World, in On the Shoulders of Giants: The Great Works of Physics and Astronomy. Ed. Stephen Hawking. Philadelphia: Running Press Book Publishers, 2002.

Wilson, Robert. Astronomy Through the Ages: The Story of the Human Attempt to Understand the Universe. Princeton, NJ: Princeton University Press, 1997.

5 thoughts on “Lessons from the Life of Johannes Kepler”