I was pleased to learn about this middle school math lesson plan that uses math to show the improbability of evolution. (The main math concept is probability, along with large numbers and scientific notation, although others are also used.) While designed specifically for a public school setting, it could be easily adapted for Christian or homeschool. (Thank you, Mr. Karl Priest, for putting it together and letting me know about it!)

I especially loved the suggestion given to have students try to write tally marks to help drive home how much a million is. Coupled with quotes like the one below, it brings home the point that, even from a human reasoning perspective, evolution doesn’t make sense:

“Imagine 10^50 blind persons each with a scrambled Rubik cube, and try to conceive of the chance of them all simultaneously arriving at the solved form. You then have the chance of arriving by random shuffling of just one of the many biopolymers on which life depends. The notion that not only biopolymers but the operating programme of a living cell could be arrived at by chance in a primordial soup here on the Earth is evidently nonsense of a high order.” Fred Hoyle, “The Big Bang in Astronomy”, New Scientist, Vol. 92, No. 1280 (1981): p.527 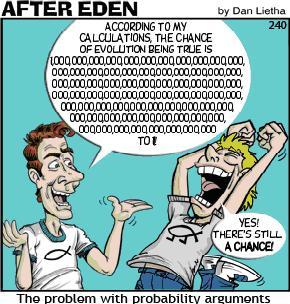 I would just add that evolution and creation can’t be proved—they occurred in the past. The issue ultimately comes down to faith, and that faith shouldn’t rest in our human reasoning of probability, but in the Word of the God who was there and has told us what happened. However, math does show us how even from a human reasoning perspective, evolution doesn’t make sense…and this lesson plan does a wonderful job showing that.

As the cartoon at the end of the lesson plan (and shown here) reminds us, you can’t reason someone into the kingdom of heaven. God has to do a work to change a heart. Let’s make sure we’re sharing the gospel with people as we remind them that creation clearly proclaims a Creator.

Note: If you’re stuck on how to begin sharing the gospel, check out the free resources at LivingWaters.com. He has a lot of helpful training materials to help.