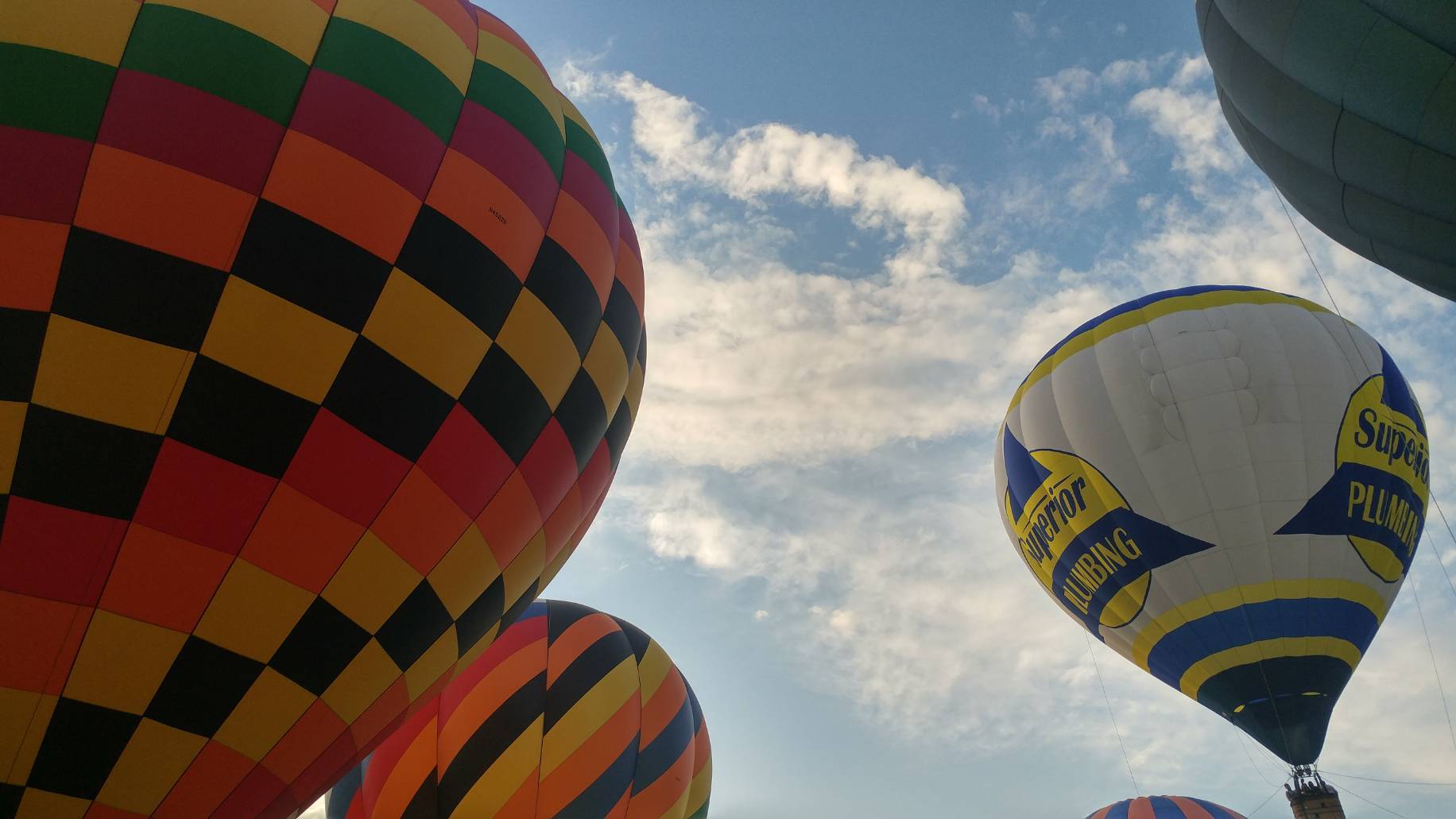 Hot air balloons have always fascinated me, and this last weekend I got a chance to see some up close. They’re huge—and it’s incredible to watch them float up and down by increasing or decreasing a flame of fire at the base.

But you know what’s even more amazing? The fact that day in and day out, the air in these balloons responds consistently to the heat from the flame used to control their movement. Let’s use math for a minute to look at some consistencies God both created and sustains in the atmosphere—consistencies that make hot air balloons possible.

Now, using algebra (which is based on creation operating so consistently that we can multiply, divide, etc., by equal quantities on both sides of the equation, and know it will work even if we don’t know the actual values), we can rearrange this equation like this:

In other words, if we change the temperature inside the hot air balloon, it will change the density of the air inside that balloon (increasing temperature decreases the density, and vice versa). Why do we care? Well, let’s look at another consistency…

Look at that equation and think about what would get a higher buoyancy force. The lower the density inside the balloon (ρ), the greater the force will be, as when we subtract it from the outside density (where the air is not being heated but staying relatively the same temperature), we’ll get a greater number to multiply by the volume and the acceleration due to gravity. Thus getting a lower density (which we do by heating up the air inside the balloon) gives the balloon a greater buoyancy force (which helps it float).

Now, there’s another variable that affects the balloon’s ability to float.  Look back at the buoyancy equation and notice the V, which stands for volume.

The larger the volume (V), the greater the buoyancy force will be! So large balloons will float better than small ones (assuming you can evenly heat all the air inside to a temperature warmer than the outside air). And now you know why hot air balloons are so large!

(You might wonder how the g in the equation influences the buoyancy. The g in the equations depends on the consistent way God causes gravity to operate, so we can’t change it. It’s a fixed value—about 9 m/s^2 close to the surface of the earth.)

Getting the Balloon to Float

Besides the buoyancy force, the only other force acting on a balloon is the weight of the balloon, the basket, and anyone or anything in the basket. We can describe this force algebraically like this:

Fg=mg,
where m is the total mass of the balloon, basket, and everything in the basket and g is again the local gravitational constant.

The Consistency of Creation & the Creator

Hot air balloons are one example of how men, using their God-given abilities to explore God’s creation—have utilized the consistencies God created and sustains around us to develop a useful device (in this case, a balloon that floats). But don’t miss the miracle of our ability to use hot air balloons. We can only get in a hot air balloon with confidence because atmospheric pressure and buoyancy operates in a consistent way, day after day, year after year. While individual balloons may have different volumes, densities, masses, and forces, the relationship between them stays the same no matter what the individual values. Without the consistencies of creation, we would be unable to use hot air balloons. It’s this consistency of creation that makes modern science (and hot air balloons)–as well as algebra–useful.

Yet why is creation so consistent that we can describe how it will operate with letters and know that relationship will hold true, no matter the actual values we plug in?

The Bible gives us an answer: because of the biblical, consistent, faithful God. Jesus is faithfully upholding all things. We have a faithful Creator God.

“He is the radiance of the glory of God and the exact imprint of his nature, and he upholds the universe by the word of his power. After making purification for sins, he sat down at the right hand of the Majesty on high,” Hebrews 1:3 (esv)

Transform Your How Your Students See Pre-Algebra and Algebra!

Want to teach algebra from this perspective? Check out our pre-algebra curriculum, and stay tuned for Algebra 2 next year! In fact, Algebra 2 students will get to explore hot air balloons in more depth as they explore God’s creation using math.

*Note: You may have seen this equation before written PV=nRT, where V is volume and n the number or mass of gas molecules. Since ρ = n/V, they’re actually the same equation.