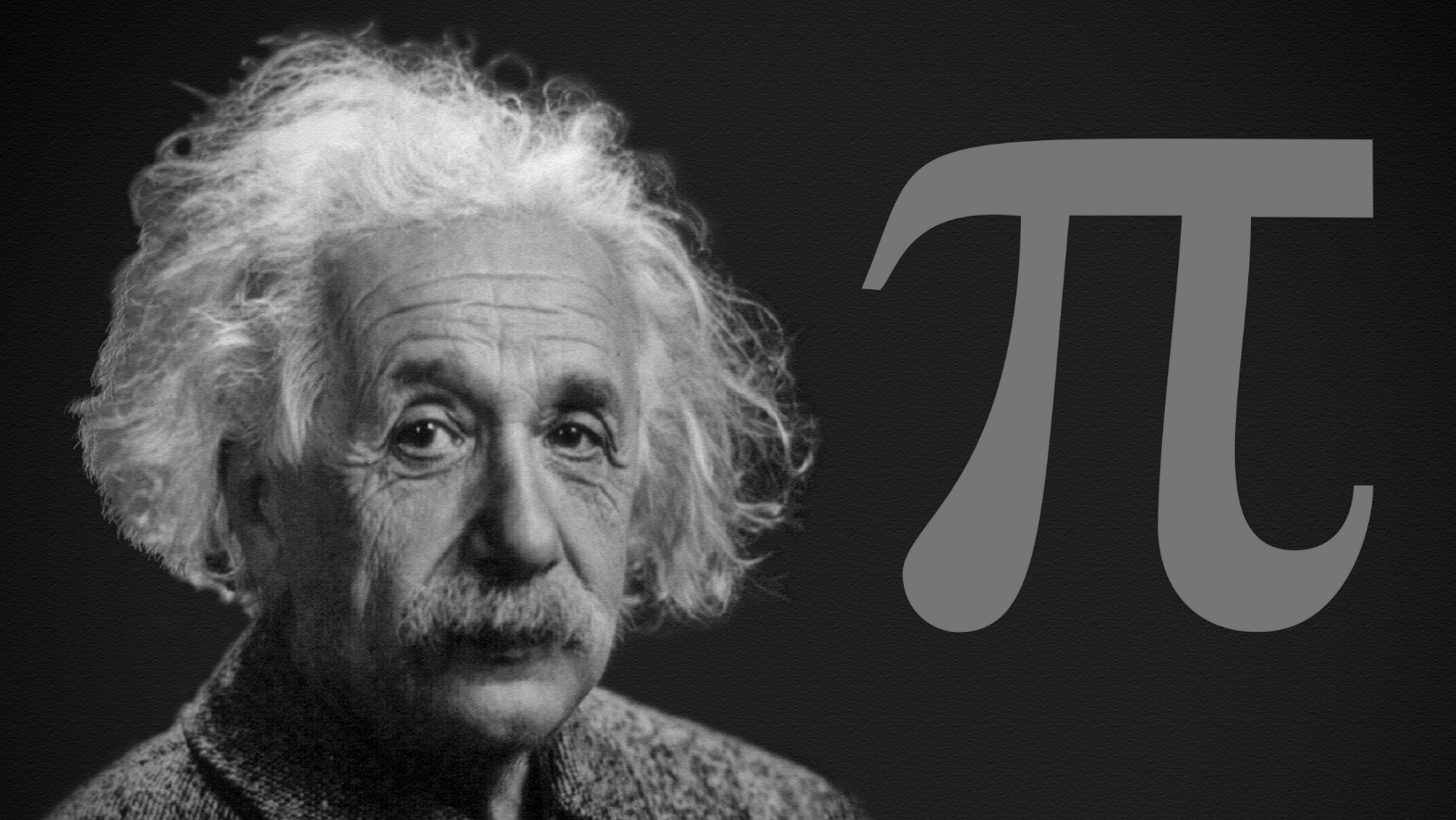 There are a lot of different ways you can use the day to build a biblical worldview of math in your upper elementary (or students who’ve learned about decimals) through high school students.

Make a circular pie and talk about how π is the ratio between the circumference (distance around the pie) and the diameter (the distance across), or π = C/d . (Note that this is just rearranging the formula for the circumference you may be more familiar with of C = πd to solve for π.) This ratio is one we can’t even calculate all the digits of! There are parts of God’s creation we can’t even fully describe. You could also explore more applications of π and discuss it further; see the ideas and links in this previous Pi Day post.

Explore (or have your students explore and give you a report on) the life and work of Albert Einstein and talk about his view of God. Here are a few fascinating highlights from his life and work:

Sadly, Einstein was not a Christian, although he acknowledged that there had to be a God.[3]

I’m not an atheist and I don’t think I can call myself a pantheist. We are in the position of a little child entering a huge library filled with books in many different languages.…The child dimly suspects a mysterious order in the arrangement of the books but doesn’t know what it is. That, it seems to me, is the attitude of even the most intelligent human being toward God.[4]

Einstein realized that creation proclaims that there has to be a Creator, or at least, according to the quote below, something miraculous. He recognized an order throughout creation and acknowledged that it doesn’t make sense why men can develop theories that end up tying so beautifully with that order—something that makes perfect sense if the same God created both us and creation.

You find it surprising that I think of the comprehensibility of the world . . . as a miracle or an eternal mystery.  But surely, a priori, one should expect the world to be chaotic, not to be grasped by thought in any way.  One might (indeed one should) expect that the world evidence itself as lawful only so far as we grasp it in an orderly fashion.  This would be a sort of order like the alphabetical order of words in a language.  On the other hand, the kind of order created, for example, by Newton’s gravitational theory is a very different character.  Even if the axioms of the theory are posited by man, the success of such a procedure supposes in the objective world a high degree of order which we are in no special way entitled to expect a priori.  Therein lies the “miracle” which becomes more and more evident as our knowledge develops. . . .  And here is the weak point of positivists and of professional atheists, who feel happy because they think that they have not only pre-empted the world of the divine, but also of the miraculous.  Curiously, we have to be resigned to recognize the “miracle” without having any legitimate way of getting any further.  I have to add the past point explicitly, lest you think that, weakened by age, I have fallen into the hands of priests.[5]

We know from Romans 1 that deep down, we all know there’s a God. Creation, as Einstein recognized, proclaims God’s existence.

For his invisible attributes, namely, his eternal power and divine nature, have been clearly perceived, ever since the creation of the world, in the things that have been made. So they are without excuse. For although they knew God, they did not honor him as God or give thanks to him, but they became futile in their thinking, and their foolish hearts were darkened. Claiming to be wise, they became fools, and exchanged the glory of the immortal God for images resembling mortal man and birds and animals and creeping things. Romans 1:20-23 (ESV)

But while Einstein’s exact views varied some throughout his life,[6] rather than heading God’s revelation to us in the Bible,[7] Einstein made up a god he was comfortable with, essentially worshiping the creation (his own intellect) instead of the Creator. Einstein didn’t want a God who would hold him responsible. He recognized something miraculous about creation, just like Romans 1 says we all do, but decided to worship a god of his own shaping instead.

The God Spinoza revered is my God, too: I meet Him everyday in the harmonious laws which govern the universe. My religion is cosmic, and my God is too universal to concern himself with the intentions of every human being. I do not accept a religion of fear; My God will not hold me responsible for the actions that necessity imposes. My God speaks to me through laws.[8]

Einstein’s birthday provides a great opportunity to point out to your students how creation declares God’s praises. There is a God—and we need to acknowledge Him and recognize that we’ve all broken His holy Law and need a Savior, Jesus Christ. Otherwise, no matter how smart we may be, we’ve become foolish in what matters most.

As you remember both Pi Day and Einstein’s birthday, remind your students to lift their eyes from God’s amazing Creation to the Creator of it all. Encourage them that creation’s very complexity/order and our ability to explore it scream out His existence.

If you enjoyed these ideas, please share with others so they can too.

[3] You can view some more quotes about his view of God here: https://libquotes.com/albert-einstein/quotes/god

[6] John Brooke, referenced in “Einstein Letters Show Views on the Bible and Christianity,” Answers in Genesis, May 17, 2008, https://answersingenesis.org/theistic-evolution/einstein-letters-show-views-on-bible-and-christianity/.

[7] “Einstein Letters Show Views on the Bible and Christianity,” Answers in Genesis, May 17, 2008, https://answersingenesis.org/theistic-evolution/einstein-letters-show-views-on-bible-and-christianity/.